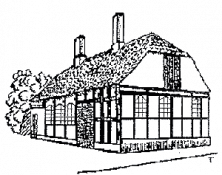 The peculiar half-timbered house "the port smithy" at the corner of Havnegade and Havnepladsen is one more than 260 years old building in its origin.
It was built in 1735 as an ammunition depot which belonged to the artillery to the guard duty being under Rønnes Bürgerkompagnie and the port battery with embankment plant.
Bürgerwache an even older ammunition house with thatched roof was approximately at the same place, the ammunition depot, however, which was sold to 1735 for 15 Slettedaler and 1 marks and this sum should on desire of the Bügerkapitäns for the preservation of 1729 Verfugung built new southern to the stand.
Not very reliable town card one can recognize the house considerably and it is also on his seen by the sea on Thuras card of 1756 about Ranne out, as for the rest specified, where it is described as an "Ammunitions Huset".
After the Depote of the artillery in 1843 were collected after the construction of several new buildings for the small fort, the "Ammunitionshuset" had got superfluous at the port.
The building was taken and established as a pile house by the port authority after the house a little shifts and direction north-south was turned by the earlier one into today's east West to make space for the shipyard.
To that it then became the port smithy.
With its over 150 years it is the oldest smithy as far as one knows, Bornholm, and there is hardly many in Denmark which are older. The building stands classified as a historical monument today and is kept all right under a strict supervision of the state woods and nature administration. When the port smithy as an active workshop was laid down, it stood unusedly for some time. The municipality would run was, however, interested in it that the smithy was needed for a sensible end and one has therefore conserved it.
The pensioners and persons who has retired early of the trade union metal Bornholm, called "senior citizens", were interested in taking the port smithy and using as a meeting place, where the old smithy subject could be continued with fire in the chimney and hammer blow on the glowing iron like in the old days.
One began on April 4th, 1990 and, since then, the smithy was not only used, many visitors came also every Tuesday morning between 8.00 and 12.00 clock to see as the old black blacksmiths form the glowing iron to things which can serve second-handly or as jewellery in working day.