Hammershus was practically power centre for over 500 years. The different dictators demanded innumerable performances from here of the poor Bomholmern.

Northern Europe's biggest ruins of a castle, Hammershus, lie on the 74 m high block of granite which almost vertically rises from the blue high tides as an eagle's eyrie.

One does not know the exact year of the laying of the foundation stone. But one knows that the quarrel had been provoked by Lund once again between the king of Denmark and the archbishop within the years around 1200. 1259 burned archbishop Jakob Erlandsen down this down happened to the Königsberg Lilleborg in Almindingen after the start of building of Hammershus anyway. Except for short-term periods the castle belonged under the owners of the Erzbischofstums in the Middle Ages. The archbishop saw 1522 the power to give an advantage to darin. to the Danish king.

The king got Bornholm the bishop, however, got the land around Varberg in Halland, Sweden. Anyway the king did not have a lot of pleasure at Bornholm. He had already 1525 to submit the island to the inhabitants of Lübeck for a 50-year period as a pledge.

Lübeck has much worked on Hammershus the it was at and fully developed, which strengthens national defense premises by the erection of half-round towers became the coat tower increased. King Frederik 2. retracted the pledge in 1576 and Hammershus became seat of a Danish Lehnsherren. to the castle under the Schwedenkriegen of 1645 and 1658 came under a Swedish command

One will always keep the date 1658 in memory here, it was Bornholmer anyway these shot the Swedish commanding officer in an armed rebellion against the Swedish power. You took Hammershus and submitted a free island to king Frederik 3.

Already in the liberation year the fall had arrived into the otherwise so impressive building. This one shall the armed force had lost meaning. Hammershus was lived in up to the year 1743 of Bornholm's vice-commanding officer.

Hammershus was practically power centre for over 500 years. The different dictators demanded innumerable performances from here of the poor Bomholmern.

Control .. For mixing up customs duties, punishments and forced labour into one looked ' like a looting that made the life difficult for the Bomholmern ruthlessly ruling extent surged, tough and tyrannical feudal lords.

Without grief and mourning the Bomholmer pursued the dilapidation of the castle, on the contrary one, just with pleasure nach. one really could use the stones once again. Christansø and also the main police station in Rønne were built partly from Hammershussteineri.

One can find bricks of Hammershus also in many old Bornholmer courts. Hammershus stood already soon as a ruin there. 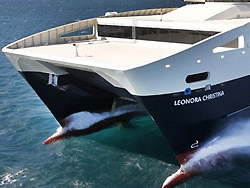