There has been Hasle since the Middle Ages 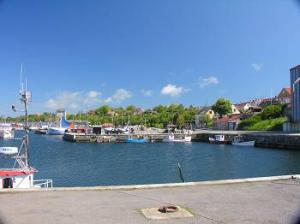 An old town is Hasle, one spoke already 1149 of the Hasle parish and the ship owners and merchants of the Middle Ages knew how to make a name to the town. Further upswing the town was for its good potatoes, cutting reindeer at that time and schnapps known followed the good later, this found out namely as one, one could dismantle the underground containing loam and coal
Already in the 17 century one dug here for coal. One their production built a glass factory and started with the Hasle clinker bricks and Chamottesten in the year 1889 in factory,
The port was laid out at the beginning of the 19th century. It became seitdern repeatedly extendedly and improved and presents itself as a modern port today.
The city of Hasle has approx. 1860 inhabitants. The fishing trade gave cause for the expansion of the port and the fishing as well is to blame at the emptiness in the port. Quota systems and ship breakings of cutters are sad stories.
The port is diligently of yachtsmen frequentedly one lies here well, one finds all modern facilities here today.